TFSA/SNA* forces continued to fight with SDF,  just Turkey stopped shelling and air strikes. For awhile. Like, after a few hours.

But now there are reports that TSK (Turkey army) recommenced shelling/ rocket attacks (People on the ground can always tell the difference.) Ras al-Ain and Ain Issa (about 35-40 km south of the border at Tel Abiad) in support of the SNA. I guess they got fed up or something. 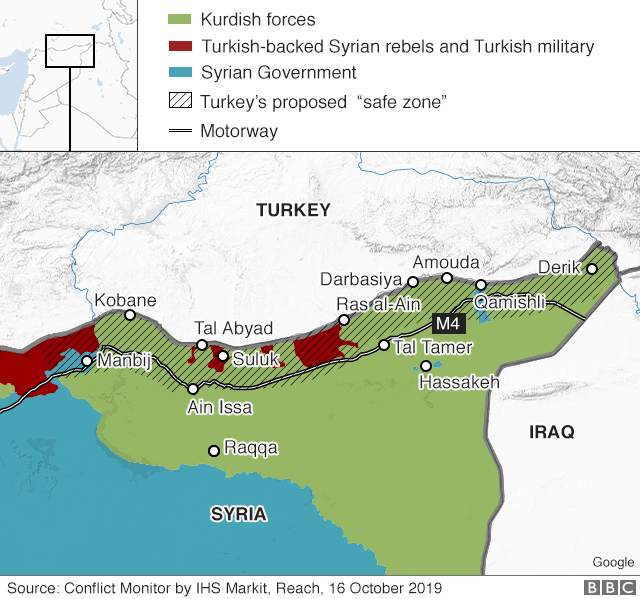 On the other hand, they haven’t leveled the cities or anything, so that’s something. Time also gives SAA (Assad’s) forces more time to support SDF positions, about which Turkey was probably not thrilled.

The Kurds are giving them a hell of a fight, though, and there are reports they’ve stalled them on the way to Ayn Issa and they may have broken the siege of Ras al-Ayn in its eastern side. The SDF resistance in Ras al-Ayn is bordering on the stuff of legend at this point, and there is reason to believe Turkey is pissed.**

Russian SU-35s have largely deterred Turkish aircraft. It is unclear if they gave any of the F-16s they encountered “the bird”. Either way, probably also pisses Turkey off.

*FSA (Free Syrian Army) has largely rebranded to SNA (Syrian National Army). The changing names offer a lens into the gradual transition from the punk rock/ethical-anarchist rebellion to Islamic ethno-nationalist jihadists. Not all FSA/SNA are Turkish backed, for the record.

**After TFSA took the city a few days ago under Turkish support, the SDF, in what will forever be remembered as an example of the difficulties of fighting a force on their home turf, fucking entered a system of tunnels under the city and ambushed them from inside the city. Since then, they’ve resisted the TFSA/SNA despite being surrounded and may have busted through the cordon on the east flank. This may in part explain the renewed shelling and at least one alleged air strike on or near Ayn Issa.

Edit: I found another useful map that does a better job of indicating SAA reinforcement of key SDF positions.