Everything in Idlib continues to be awful.

Now, there are two things at work here. One is that the relative calm in eastern Syria brings into sharp relief the violence conducted in the west.

The other is that it has gotten objectively more violent.

Assad’s regime forces, backed by Russian air power, have been softening the opposition for a major offensive against the various Turkish back militias, other various and sundry militant jihadi groups, and basically a bunch of other types that are more than I can keep track of, much less their alignments.

Now here’s the thing: Everybody knew this was coming. Everybody.

Which also means that, besides the constant air bombardment, the war in the west has progressed in rather predictable fashion for a few days now.

Which, in turn, means that, the whole war thing notwithstanding, a lot of the observers of the conflict get bored. And when they get bored, much like people not at war, they screw around.

In the particular case below, they’re screw around with the idea that literally everybody knows what is coming.

There was a looming offensive for months

Nothing like a good troll before the fighting starts, eh?

Which underscores, again, the fact that everybody knew this was coming.

And here goes the next part of the Idlib offensive

The SAA begins its ground operations in the Idlib countryside,amid the storming of several axes in the southern and eastern countryside of Idlib,and violent clashes are now taking place with terrorist groups amid fierce artillery and misile shelling and cover from the air forces

The Jihadists in Idlib just began their party of tears

‘Pray for the faithful Jihadists’ pic.twitter.com/kQzIRR1uE8

The Syrian Arab Army takes control of the village of al-Halba
Idlib countryside,

So even the jihadis at whom this offensive was targeted knew it was coming. They apparently even whined about it.

And people also apparently knew that Turkey wasn’t going to back-up many of the anti-regime forces, mostly because Erdogan, despite depicting himself as leader of the Islamic revolution and actively exporting this crabbed version of the faith, doesn’t actually give a shit about their cause.

#Turkey–#Russia agreement. This move will happen. And #TFSA just follow Turkish orders as good mercenaries. They are not in Syria to support Syrians, but Turkish territorial ambition. If Turkey asks them to go to Libya to fight, they will go to Libya to fight… https://t.co/4t3gtBzqo5

You can see the importance of the M5 here as its the major highway defining the conflict in the Idlib region (Idlib the city marked by the little red thingie). 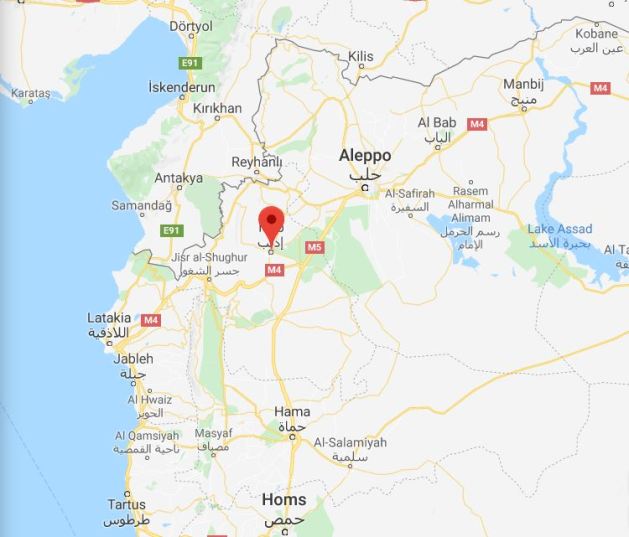 So yeah, the Syrian opposition is getting smashed from the south and then also flanked from the east, so they’re getting squeezed.

There have been a ton of tweets absolutely raving about the success of this operation. Most of them are full of words that don’t really convey the feeling unless you read a bunch in a row.

So the pro-Assad types here—or, more accurately, against the anti-Assad opposition types (Turkish forces, terrorists, etc.); many of them aren’t particularly fond of ole lesser-of-two-evils Assad either—they started bored, which got them a bit restless and feisty, which steadily moved towards exuberance at the success of the operation.

Which briefly made me forget to ask a critical question:

Why the fuck are they doing this?

So while following the discussion of the operation was kinda fun, the operation itself had the horrific outcomes that an assault like this necessarily produces.

In #Moscow, the terror against Russia lasted for 30 minutes.
In #Idlib, Russia’s terror against innocent civilians lasted the whole night and continues right now.#PutinAtWar https://t.co/bUXrrJB7rn

#SOHR The regime forces try to advance into the eastern countryside of #Idlib – more than 140 air strikes target the "de-escalation" zonehttps://t.co/SylAXYX66b

They didn’t have a chance. Which is sorta fine with me, since we’re talking about a lot of people who want to start a new caliphate of toxic masculinity and/or bring about the apocalypse and the war to end the world.

So yeah, they gotta go.

But then there’s all the ruined cities, villages, infrastructure for an economy and food and stuff, the land itself. And the people.

It probably goes without saying that the people don’t want this.

#Idlib: Mass demonstration took at place at the Bab al-Hawa Border Crossing in which hundreds of people came out to silence the Turkish "guarantor" against what is happening in Idlib. pic.twitter.com/8TXVOqCODZ

So, I’m not doing the whole “Why does war even exist?” thing here. War, unfortunately, makes a lot of rational sense, especially in how it so wildly benefits the few at the cost to the many.

While struggle can certainly be intimately connected to a way of life, this is not that.

The root of the word, though, is from the Latin for sacred.

Pointless risk is not sacred. To the truly faithful, it might basically technically be the opposite, because then you’re effectively denying to your god the possibility of further service.

That’s just dumb. I don’t think a lot is gained by equating suicide with sacrifice.

So this is awful. The destruction and suffering that we can see in real time to be completely without constructive purpose, since those choosing to commit destructive suicide-by-army could just opt to do something, well, better with their time on Earth.

Now, this may be a weird way of putting it, but I think we can see another level of how awful this arrangement is in the violence it does to noble concepts. Like with sacrifice above.

And maybe even to the very concept of human liberation itself.

Yeah. That at times may be necessary. But if that depicts liberation, we need to change a whole lot of things. Because that ain’t right.