The last thing I want to do is over-summarizeb ut having now read all of the above myself, a couple of the links (extracted from Twitter) and one thing Rev wrote struck me as particularly important.

Drone footage of Damascus and Aleppo

New York Review: Who Are Turkey’s Proxy Fighters in Syria? 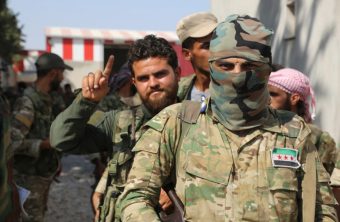 Major state actors are in coordination on an integrated operation (or set of operations) to separate Rojava from the support of the international community as part of an effort to wage war on every level. Indeed, even the “lull” is a form of misdirection to get us to focus on a reduction of kinetic violence and take our eyes off of the “lower level” violence that sows the seeds of terror and the higher level, almost invisible, global political machinations at the state level

There’s less artillery shelling, perhaps. But that disguises the fact that there is more war. Indeed, the war is total. Heck, we’ve even seen Turkey trying to eradicate the Kurdish language and, indeed, culture itself. That’s what total war means. That totality just happens to be much larger than our conventional conception of war, i.e. the stuff we can watch easily on TV.

It’s been an interesting day on the Twitters. I think so anyway. But, I mean, it’s Twitter.

In 3 days @jensstoltenberg is going to be begged by Turkey to classify the YPG, the very group that defeated the world’s largest terror organisation, as a terrorist organisation

Given his recent statements supporting 🇹🇷, I can’t help thinking he’ll side with the men in the video https://t.co/H8Mq9eoBlg

▶️Turkish-backed Syrian fighters are seen along a road in the countryside outside Ain Issa in Syria's northern Raqqa province, Saturday, November 30.

This is older, but it showed up today; hadn’t seen it before.

Al-Monitor: IS designates Turkey as its next base

Turkey — the logistics lifeline of jihadi movements in Iraq and Syria — has failed to clear its own backyard of jihadi threats. There are credible indications that the Islamic State (IS), after losing its territorial dominance in Iraq and Syria, has designated Turkey as its next reorganization base.

Iraqi intelligence sources have provided solid information that the brains of IS have moved to Turkey. The United States has tracked the jewelry shops and foreign currency exchanges used by IS in money transfers. The US Treasury Department on Sept. 10 placed al-Haram, al-Hebo, al-Khalidi and Saksouk foreign exchange bureaus and jewelry outlets on its sanctions list for transferring money for IS.

Seems everyone who is fighting ISIS in the region agree on this point:
Including Coalition, SDF, KRG/Pesh, ISF, etc. https://t.co/JgsNnk1wbx

Gen. Mazloum Abdi: Washington and Moscow should put pressure on Turkey to respect the ceasefire https://t.co/p4E5DZYggP

The people of Rojava are out in force now, too. Despite there being a war on and stuff.

Thousands mobilize in Eyn Isa to say "no permission" to Turkish occupation.#Rojava pic.twitter.com/26wnBaeVOy

And then a surprising amount of… dancing?

Another day of… I dunno, contradictions? Harmony of contradictions? Drums and bass? Celtic music over African beats? (That was some peak internet, IMO. I dunno. The place is wild.

Like, it stands out even on a day where, to borrow from a buddy of mine:

This might be the single most badass civic engagement moment in human history. An immigrant plebe grabs a unicorn’s horn to fend off someone attacking his adopted country?

This should be a musical. Lin-Manuel Miranda has his new muse.

Rojava is somehow still more lit. Probably the only thing in the world more postmodern right now, too.

SDF aim to impress with special actions. Wait for the news. 😌

This really is a badass moment in the history of civic engagement.