The Union of European Football Associations (UEFA) declined to fine the Turkish national soccer team for political statements in the form of military salutes. Issues fines for fans for the same stuff.

This is a double standard that, beyond all logic and reason, is a real thing that happened.

European football’s ruling body UEFA has slapped Turkey with a reprimand for military salutes performed by the Turkish footballers during two Euro 2020 qualifier matches. The UEFA has also fined Turkish Football Federation (TTF) 50,000 euros for crowd incidents during the matches.

The Turkish players made the military salute on Oct. 11 to celebrate their victory against Albania in Istanbul. Three days later on Oct. 14, they repeated the gesture while celebrating a goal they scored against France in Paris. The salutes were given in support of Turkey’s offensive in northeastern Syria.

Amid calls for the UEFA to take a firm action, the organization said on Oct. 15 that it was investigating “potential provocative political behavior” by the players during the two Euro 2020 qualifiers.

The UEFA announced the result of the investigation on Dec. 11, fining the Turkish Football Federation 50,000 euros. TTF acting president Servet Yardımcı made a statement regarding the issue, saying: “There is no fine given related to the military salute. The UEFA has given a fine of 50,000 euros only regarding crowd incidents.”

Beyond all the bad things going on here, there is something really fundamentally dumb about fining fans, a.k.a. “fanatics,” for following the lead of their sports heroes. 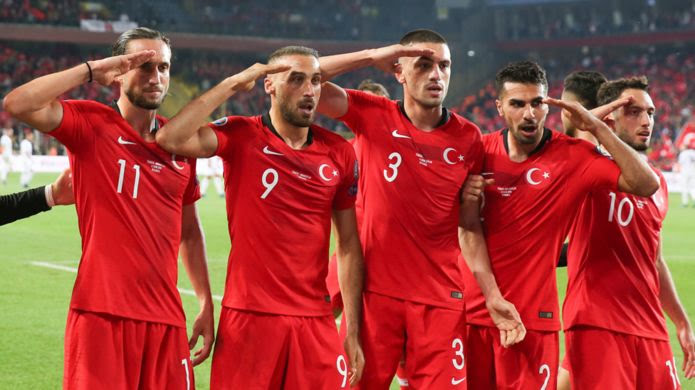 Tosun posted the salute photo on Instagram, with the message: “For our nation, especially for the ones who are risking their lives for our nation.”

Uefa does not allow political gestures.

Hell, even the sports message board that this blog began on would suspend the players if they expressed anything like this in the non-political sports forums; we don’t tolerate that crap here.

President Recep Tayyip Erdoğan said in a news conference in the Turkish capital Ankara that UEFA should be aware of this wrongdoing.

“When it comes to Turkey and Turkish athletes, the attitude [of UEFA] changes,” Erdoğan said, adding that Europe’s football body should not let sports be politicized with their wrong decisions.

He said that the UEFA action targeting Turkish athletes’ solidarity with the Turkish army means “an obvious unlawfulness” as it described these celebrations “provocative political behavior”.

Turkish players in all sports especially football have been celebrating by a salute in tribute to the Turkish soldiers engaged on the frontline.

So a lack of solidarity with the Turkish military is unlawful? That’s like fascism 101.

Let’s be clear: If you express yourself, you’re responsible for the message. If you make a mistake, sure, but the message sent is out there.

And we all understand this implicitly, even if sometimes things need to be teased out a bit.

For example, lots of people don’t realize that it used to be that when Americas pledged allegiance to the flag, we did the Bellamy salute.

And people wonder why some people refused to do that for religious reasons? Heck, it even had to go the Supreme Court because some Christians—Jehovah’s Witnesses, to be precise—felt that might run afoul of idol worship.

Something about the Commandments.

So basically, after national socialism reared its ugly head and got really, really into the Bellamy salute, Americans didn’t feel comfortable with it anymore.

So they bent the arm at the elbow and dropped it a bit.

What’s interesting is that the change in the salute has, in a way, “retconned” the meaning, and it became more about the heart and less about the mind; less formal rational obedience and more about an emotional engagement of the act.

Now, both speak to how people relate to the spirit of the thing, but those are very different things in terms of their function of how a human being thinks and feels about the whole thing.

Now, a discussion of the pros and cons of moving the salute from the head to the heart would require extensive treatment. Suffice to say, for present purposes, the fact that there is a difference matters.

So, yeah, if Turkey feels they’re being discriminated against, it’s not prejudicial discrimination: Their behavior is being singled out because it’s overtly political in ways that soccer doesn’t want to have associated with the game.

The fact that that it’s creepy as fuck isn’t the only reason to forbid the behavior; it simply underscores why the rule exists in the first place.

Like, we use so many military analogies with sports that it might not strike us as that odd to see athletes embrace military imagery.

Man, you can barely even see the hat in that last picture, the way the camouflage makes it blend right in with its background. Very stealthy; a good hat to avoid calling attention to yourself, right?

Or, alternatively: It’s meant to communicate something else entirely.

So what happens when we see non-athletes do the same thing we’re used to seeing the athletes do.

As, for example, with this specific Turkish version of the salute.

This is a public high school Kayseri Lisesi in #Turkey's heartland. Students hail Turkish defense minister Hulusi Akar with a soldier salute. #Erdogan is bent on raising a new generation of nationalists and Islamists. pic.twitter.com/CCI8NEaiFk

This is clearly not OK.

And it’s not like anyone isn’t saying you can’t express yourselves at sport ball matches.

And maybe we find that we’re spreading some ideas when we didn’t even realize it. But that’s a good realization: It lays the foundation for doing better.

I’d love to offer some kind of scathing rebuke to international soccer federations, but they’re apparently doing about as well as NATO, I guess. And it’s a lot easier to find information on why FIFA is awful than it is on our somewhat more important international organizations.

Not that soccer isn’t important, of course.

And, certainly, it can express other things as well.