Note: I first apologize if there is a long load time on this post. Trying something new that I hope will be interesting for this post and, if it works, it should be worth the load time. Thank you for your consideration.

I was going to call it the Battle for Ayn Issa, but that doesn’t strike me as accurate. It sounds like a big fight with a big and an end. This ain’t that. It’s been a steady build of violence now including substantial artillery and air strikes by “the regime” (Assad’s forces, but “the regime” seems to be the hip way to refer to them of late. Like how I learned all armor is “panzers” in the lingo of the place. Or something.) which may include not just drones but fighters.

And it looks like SAA/SDF, fighting shoulder to shoulder one might say, are shoving the TFSA back.

There’s a lot going on there, so first, let’s do a quick look at the west and then move east. 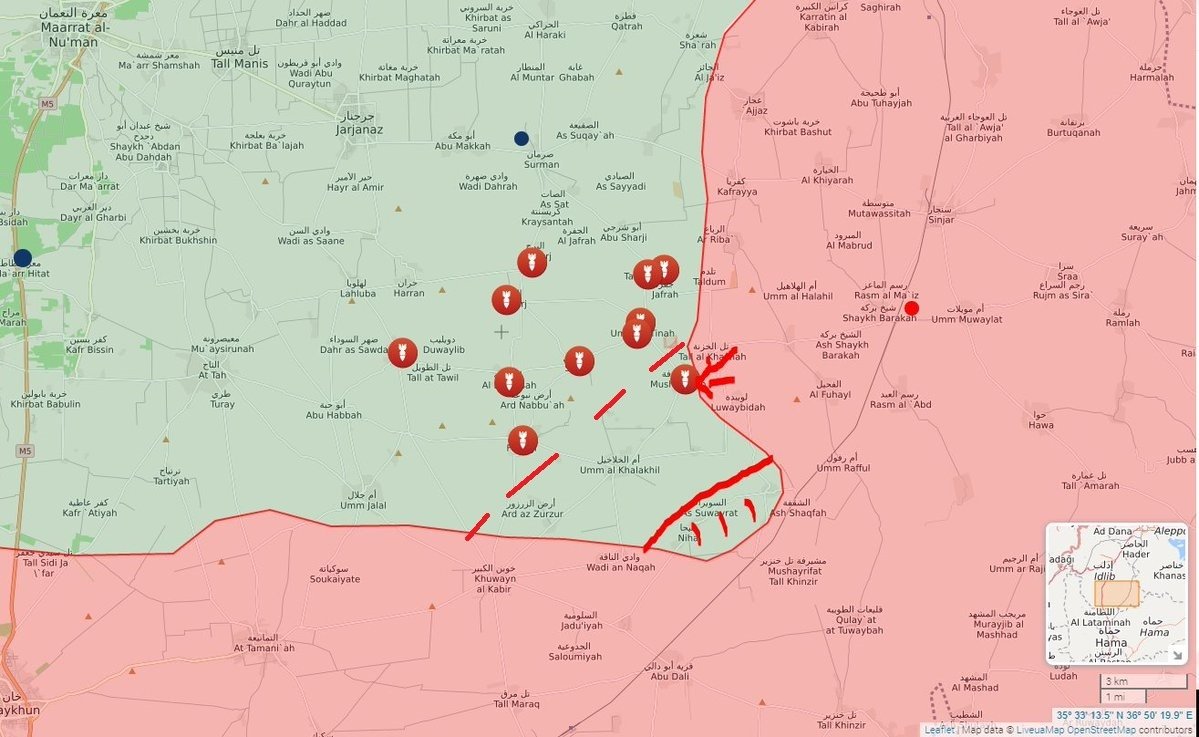 That should pretty much cover that.

Now, the intense fighting in the east is clearly especially concentrated now around Ayn Issa, and the chatter has been very focused on that place.

This is obviously a vital strategic area with the M4 and the road north to Kobane, but also the routes to connecting all of the above with Raqqa to the south, and, well, there’s a lot of ways of saying it’s a crossroads in the middle of everything and wicked important.

Ain Issa sits on an important intersection between Til Temir, Raqqa, and Kobanî which was, until today, the main route connecting Kobanî to the rest of Rojava.

Raqqa has the red marker below.

The whole cross roads thing makes its importance pretty obvious, both tactically and strategically, everything from military movements to food and aid. Travel. Commerce. Everything.

But it’s also not Kobane, about which there had been chatter about a big move. Of course, fighting did intensify there, but then Russia made a lot of noise about being there, so that could have certainly changed things.

So basically, today was all about Ain Issa, and everybody seemed to know it. There is an ebb and flow to the topics of the day there as anywhere else. Obviously there is always a certain amount of noise, but in terms of main subject matters on any given day, certain topics of the day emerge. Like anywhere else. Some days more is going on than other days. Some days, there is fighting in a couple places that people are talking about. Other days, they share pictures of cats and troll US Senators. And then some days, all eyes are on one place, and today that was Ain Issa.

There was so much interesting stuff, I’m going to briefly go over the geographic situation, and then just dump a bunch of stuff for people to scroll through to see what I mean. And then at the end there’s something about Deir ez-Zur buried at the bottom. And no, it’s not oil.

There is of course an IDP camp that Turkey seems to want to fuck with.

The TFSA is attempting to take the IDP camp still. Much damage to the already evacuated camp. Many tents destroyed.

That didn’t make sense to me at first. And then I thought, What Would COBRA Commander Do? And then is was obvious that he wouldn’t blow up the camp and kill all the residents, but rather he, in his infinite turpitude, would damage all the infrastructure, rendering the refugees even more homeless than before and worsening the humanitarian situation on the ground and further problematizing the war for his opponents. I think I’m getting the hang of this overwrought comic book villain shit.

Anyway. Here’s some maps and a brief low-down. 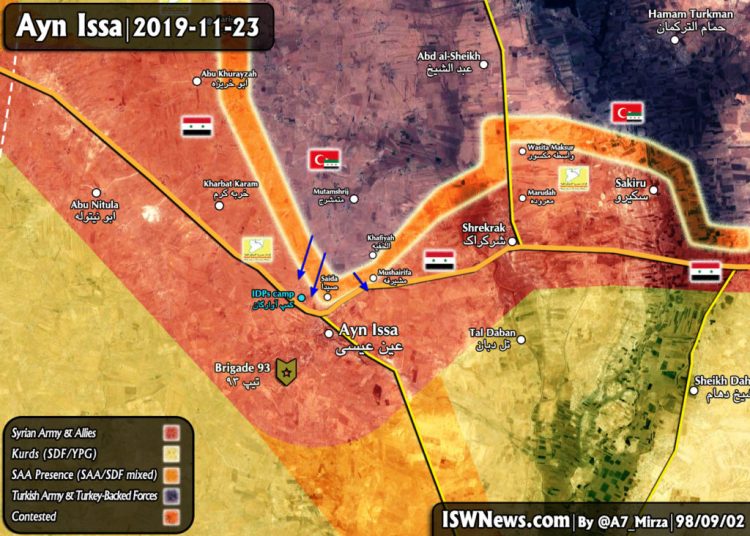 ISWNews Analysis Group: Today on 23 November, the militants with Turkish Army heavy air and artillery support have begun a large-scale attacks to capture Ayn Issa in north of Raqqah province.

Ayn Issa and the “Brigade 93” are the main base of the Syrian Army in the northern province of Raqqah, which they entered it after agreeing with Kurdish forces.

It should be noted that Turkish mercenaries (TFSA/FSA) managed to seize the IDP camp in the northwest of Ayn Issa But shortly thereafter, the Syrian Army and the SDF were forced them to retreat with heavy counterattacks, and as of this writing, heavy fighting over control of the IDP camp continues.
According to local sources the camp suffered heavy damages due to clashes.

Now the data dump we’re trying today. Hopefully it doesn’t kill load times, because I think this could be interesting. I’ve already explained that I don’t generally do this because it’s sorta gratuitous, and most of the stuff looks pretty similar after awhile. Cannon gonna cannon.

But today was a bit different. So I think it’s a useful illustration here. You can see a bit of what a Twitter feed focused on an area might look like if you strip out a lot of the noise.

We’ll start with a fun game—almost the same video with two different descriptions!—and then you can sort through whatever it is you want to do.

Turkish forces launched attacks with tanks, artillery and a large number of mercenaries on several axis to invade Ain Issa since the morning. The cease-fire agreement is once again being violated by Turkish army. pic.twitter.com/HwZVNpTPGJ

Our friend @BoscInternacio1 is in Ain Issa, were the jihadists gangs started to attack the city.

From the IDP camp near the city already some time ago families linked to #ISIS were able to escape because of attacks from the Turkish invasion army.#RiseUp4Rojava pic.twitter.com/1mjarvmehH

I can confirm that SAA did not leave their positions despite getting hit with howitzers multiple times and that they are still engaged in fighting alongside the SDF. https://t.co/vb3ybK0nCV

SAA have orders to hold Ayn Issa. They’ve got artillery and atgms here that they’re authorized to use.

2/2
The SDF will not back down in defending Ain Issa. #Ainissa #SDF #NESyria #Syria pic.twitter.com/humEieyMnI

Drones or jets is the question. So far they mostly used drones https://t.co/eCoFAK7qTM

Intensive Turkish army artillery on the outskirts of Ain Issa which is outside agreed ‘safe zone’ It looks like attacks hit near a joint Syrian government and Russian base https://t.co/qsuyjcxlL5 pic.twitter.com/YsuD4eWO9C

"The M4 highway is likely Turkey’s prime objective. in Kobane, aid is already in short supply—with all traffic already forced to travel via Raqqa due to Turkish aggressions elsewhere on the M4.”@RojavaIC's observations from the Ain Issa-Kobane axis:https://t.co/vFBfWZ3aod

Ein Issa – Scenes of the city of Ein Issa in northern Raqqa, which is undergoing attacks by #Turkish forces and affiliated armed opposition groups.#syria #SDF #US #Turkey #Russia pic.twitter.com/DPcrTFdsiz

Daily struggle in Rojava for many a revolutionary pic.twitter.com/s0xPK5afrj

Unless the airspace is dealt with the situation will always be difficult.

This is absolutely beyond parody. https://t.co/97TzqDah3F

Ein Issa: Footages of Turkish aerial bombardments targeted the water tank and its surroundings in the outskirts of the city of Ein Issa, where there was a site for Syrian government forces who withdrew from the area. pic.twitter.com/QxtEVZa66d

Oh, and then there’s this.

The operation resulted in multiple ISIS fighters killed and wounded.