So it has become apparent that fancy Turkish Kirpi [junk] MRAP can't drive where the Russian armored vehicles can, so these keeps getting stuck in narrow roads and angry civilians know this.😁
Keep in mind, there's at least 2 Russian vehicles leading the patrol.#ypg #SDF #kobani pic.twitter.com/2p1w7ze3B3

Kobani residents protest joint Russian, Turkish patrols inside their land. There are some reports that some protesters injured and even killed pic.twitter.com/BQn2hGkcBt

Russia turns this rock video into subtle propaganda; rock throwing begins at 01m00s. It’s a brilliant juxtaposition of how they are treated by the locals as compared to the Turkish army

Nota Bene: The above Tweet is part of a thread by a guy who is a downright connoisseur. And, for that matter, a collector.

And this one: I thought it was funny at the time when @BroodsSexton compared this thread to Mad Max.

I had not yet learned the truth of the way of COBRA Commanderism.* I was so näive then.

And round it out with one in the classical style: 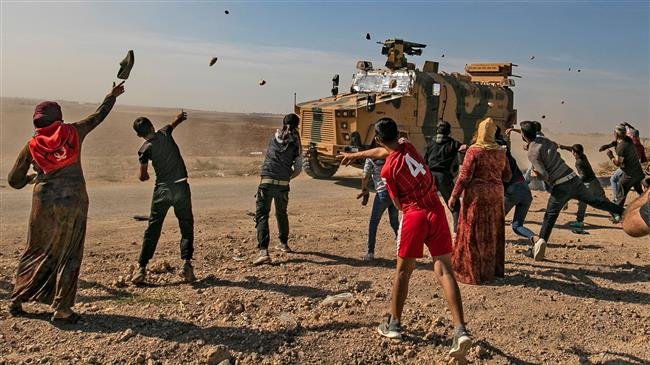 I realize sometimes not everyone is “in” on the joke, but if you focus on the last picture in Rev’s post I quote, you’ll see that everyone is throwing rocks, as you do. However, the lady on the far left is throwing a shoe.

I bet @teddywingman could write an amazing song about this. Like the Ballad  of the Shoe Throwing Lady. Or something better. Probably better.

*COBRA Commanderism is a theory I am developing the better to understand this mad, mad world we live in. Now that it’s been established beyond all possible doubt that we are all clearly living in a simulation, the next logical step is to realize that the reason everything seems so weird is because we’re not living in our own simulations, but in COBRA Commander’s simulation. We are but supporting characters to COBRA Commander’s protagoneering of the plot. Thus, to figure out what’s going to happen, just consider what narrative is that which is most likely to occur in a world where COBRA Commander is prominently involved. This will inevitaby happen; hey man-it’s COBRA Commander’s world, we’re just living in it. Then it starts to make sense. Like dropping off a terrorist in the middle of a militarized no-man’s land in the east Mediterranean or holding a political prisoner captive on an abandoned island with an entire brigade of men to guard him. Shit like that. At some point, to make sense of the world, one must grasp the truth of COBRA Commanderism. And then things become a lot more clear.