So, brief wrap on the ground, as much of it is just adjustments to the existing situation. More slow intensification.

While sitting around playing Parcheesi or whatever it is they do out east when not patrolling, Russia continues to go even more HAM on Idlib alongside the SAA including maybe upped airstrikes. SAA also apparently dropped a bunch of barrel bombs on a TFSA stronghold near Kobane. 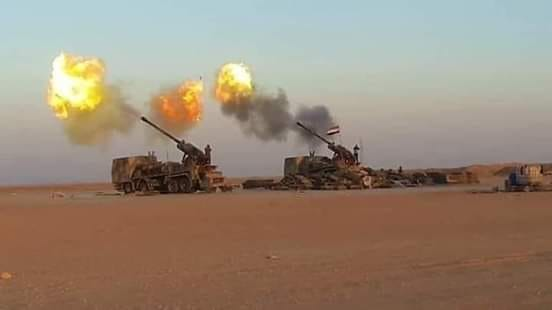 Shahed-129 of Iranian UAV in the sky above Idlib

So, if you’re keeping score, in some places Russia patrols the border, in others, they just sorta watch, in others they let SAA hit TFSA from the air, and in others they join SAA and go HAM on the TFSA.

Which means the struggle over the M4 continues, especially northeast of Ayn Issa where the road to Tal Abiad crosses the M4, without me being able to see anything decisive on it.

The #SyrianArmy has taken control of new points along the #Aleppo-Hasakah Highway this week. The #SAA expanded further west of Tal Tamr after fending off the Turkish-backed militants in this area. pic.twitter.com/nIWe9PG4Ps

I think somewhere in all those situations that basically checks almost every box for what they could possibly be doing with themselves, but all in the same war.

Oh: Plus cramping the US’s style:

#Russian #military ramps up operations in #Syria perilously close to an area that American troops have been charged with defending. #USArmy #NationalSecurity #conflict https://t.co/BK6HflieWT

RUSSIA HAS CHOSEN TO establish a new military base in a part of Syria perilously close to an area that American troops have been charged with defending, heightening the risk of a confrontation from either an unintentional skirmish or a deliberate provocation.

For obvious reasons, the locals continue to communicate how cool they are with the Russians.

On 22 November, Russian military police officers conducted patrols in the #Kobani area without Turkish troops. As a result, there were no provocations from local residents, and the #Kurds are ready to welcome Russians, but not Turks.#Syria #Russia #Turkey pic.twitter.com/ui5B0dSUxA

Meanwhile, the “demographic change” of the region Tyrkey is undertaking continues.

The ethnic cleansing by Turkey that everyone knows about but is not doing anything to stop continues. #Rojava #KurdsBetrayed https://t.co/4PEHU75Tan

TURKEY spearheaded its Syrian invasion with unreconstructed IS jihadis, and let them run riot in a campaign of executions, murders and expropriation. Having forced more than 300,000 Kurds form their homes, Turkey is now importing Arab refugees to repopulate the abandoned towns. pic.twitter.com/8Yhps1aHh4

And just when you thought things couldn’t get any worse: