There’s a short backlog of things to post, but I need to sleep; I will update these posts later.

I especially want to discuss why Operation Inherent Resolve all but sent a cootie catcher with “I Like You Do You Like Me?” written on it to the SDF.

Maybe discuss why and how they deleted it to-though the reply Tweet is subtle but in some ways even more funny.

Well, if it’s important for winning a war, wouldn’t we expect to have some kind of Elite Twitter Guard as well?

So it makes sense. I think. As much as anything else.

Anyway, until we get to that:

Here’s some stuff to watch.

Tonight 10pm ET tune into @MSNBC for the latest episode of #OnAssignmentMSNBC with @RichardEngel – #AmericanBetrayal – if you can’t join us live set your DVR. pic.twitter.com/9KBNaghAxv

VIDEO LINK: MSNBC: The Kurds: Did America betray an ally?

Meet the creators of the award-winning “For Sama” — a film told through the eyes of a mother, surviving 5 years of the Syrian conflict. “We’d never seen anything with this depth and, frankly, this much heart,” says @raneyaronson. Tune in or stream 11/19 at 10/9c on @frontlinePBS. pic.twitter.com/YeiuqP7OVc

And I’ll leave you peeps with two things.

First: a man who, war be damned, just has to dance!!

This is quite literally the most kurdish thing I have ever seen https://t.co/KOXx7LryHh

And because I’m not gonna talk to Darnell’s Son for a bit: Keep on rockin’ in the free world:

As this footage shows, both Russian and Turkish vehicles were targeted today.

Though Turkish vehicles meet with the most vocal anger, there is also local frustration with both Americans and Russians for their perceived failure to stop the Turkish advance: https://t.co/PTeQDjMEvw 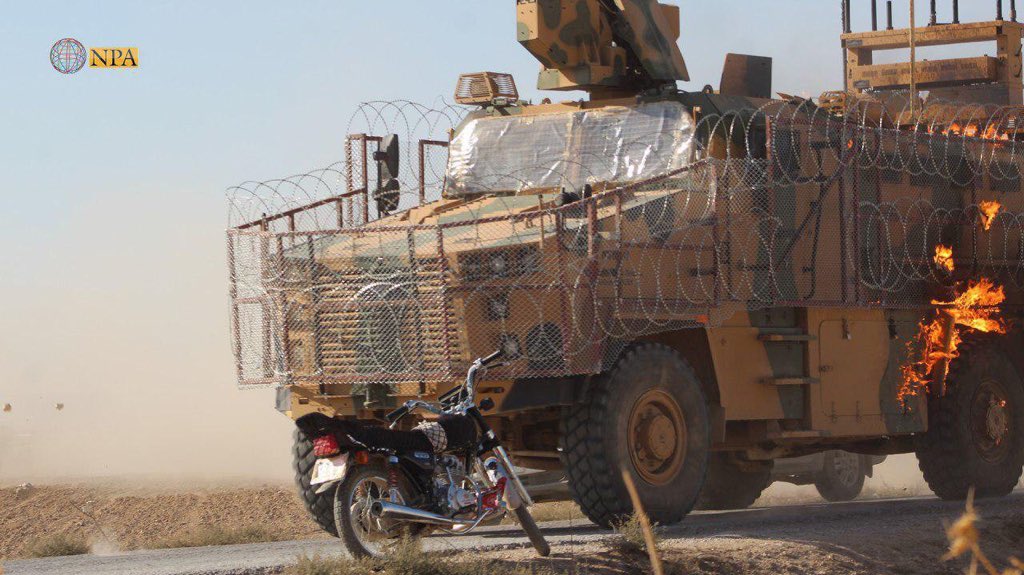