In 1964 Majd won "The most beautiful child" in Syria & awarded car pictured below. In 2019 he's been held hostage for nrly 1000 dys in the same country that adored him. Majd never committed a crime. As a therapist, he's only given love & compassion to all. Please let him free! pic.twitter.com/7qtP2IwvFT

Here’s how I learned about Madge.

So, like, I’m supposed to understand that Syria has taken a therapist once voted most beautiful boy in the whole country and put him in a cage? Am I understanding this correctly?

New York Times: An American Disappeared in Syria 2 Years Ago. His Family Wants Trump to Help.

BEIRUT — Since disappearing in Syria nearly two years ago, an American therapist has missed the birth of one grandchild, then another.

His family in the United States does not know where he is, who is holding him, whether he has the diabetes medication he needs or even whether he is still alive. They have not spoken to him since he told them he was making a quick trip to Damascus from Lebanon to visit relatives in February 2017, packing little more than pajamas in his overnight bag.

OK, this is stupid and awful.

But the F.B.I. and the State Department, which had advised them to keep the case quiet, have made little progress in finding him, and Mr. Kamalmaz’s family now wants to promote the case, hoping to catch President Trump’s ear and encourage him to put the weight of his office behind efforts to free Mr. Kamalmaz.

Now that just isn’t right. They take their man, and then our government stifles their voice.

It sucks to have to rely on others for something important. We lose all feeling of agency, of control over our own lives and our fates.

Needing people never sucks more than when you feel vulnerable.

“Isn’t the president of the United States one of the most powerful people in the world? We believe he can do it,” said Maryam Kamalmaz, one of Mr. Kamalmaz’s five children, in an interview. “Hopefully, President Trump can look through our ancestry and realize that we are American, we’re American citizens, my father is an American, and he needs to be brought home.”

So why is this guy in a Syrian secret torture prison?

A longtime clinical psychologist in Virginia and Texas, Mr. Kamalmaz had traveled the world as a one-man mental health clinic, offering free trauma therapy to survivors of Hurricane Katrina, the 2004 Indonesian tsunami and the war in Kosovo.

He had come to the Middle East to do the same for refugees from the country of his birth, seeing and treating Syrians from both sides of the conflict at clinics he had opened in neighboring Lebanon.

“He was committed to helping all people — it didn’t matter which side they were on,” Ms. Kamalmaz said. “I think he felt a calling to go help the Syrian people as much as possible,” she added, “because it did hold a dear place in his heart.”

“He’s always said, ‘We are American, we have to give back to this society, because as Americans you love your country and you do what you can for your country,’” Ms. Kamalmaz said.

This is very frustrating.

Maybe they’re laying it on thick in the piece to try to get him back? I mean, Syria doesn’t actually have a guy like this in jail, right?

HeartMath? Um… interesting juxtaposition. Is that like the old “Army Intelligence” joke?

I can’t find any Wiki on the organization, but this is from the Wikipedia of the founder, Lew Childre.

Doc Lew Childre, Jr. (born September 7, 1945)[1] (pronounced “Chill-dree”)[2] is an American author[3] and the founder of the Heartmath Institute, a non-profit organization whose objective is to help the development of “heart-brain-coherence”. He works on child development and strategies for dealing with stress.

You have got to be fucking kidding me.

For real? This is a thing that happened? Is happening? 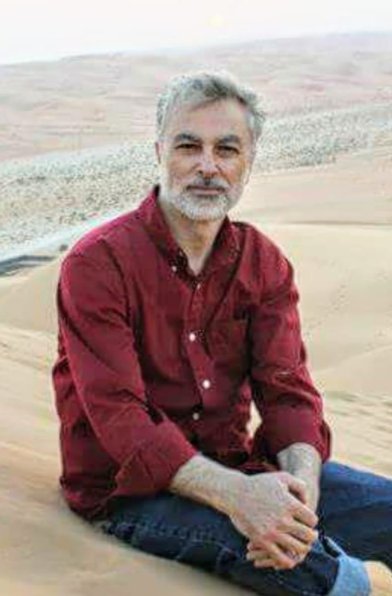 NPR: Family Of American Jailed In Syria Goes Public In An Appeal To Trump

OK, my first though was: Does he always look like that? I feel like I could tell him anything. Hell, I want to tell him everything.

The answer is, basically, yes. There are more pictures in that piece. And it appears that he just exudes the gravitas of kind, patient love at all times. I’ve cruised around the internet; it’s borderline unsettling. He’s just actually like that.

And Syria has thrown him in jail. Secret torture jail, in fact.

The family of an American citizen believed to have been jailed in Syria two years ago is making his story public for the first time, spurred by President Trump’s announcement last month that he will withdraw U.S. troops from the country.

Majd Kamalmaz, a 61-year-old psychotherapist from Arlington, Va., arrived in Damascus on Feb. 15, 2017. He traveled to the Syrian capital for a condolence visit following the death of his father-in-law and to check on elderly relatives, according to his family. They say he was arrested at a checkpoint a day after he arrived.

“He felt safe going in. He’s an American citizen. He has nothing to do with politics. Why in the world would anyone try to harm him?” asked his daughter, Maryam Kamalmaz, from her home in Grand Prairie, Texas.

Family members say they have been working closely with the State Department for two years to locate Kamalmaz and secure his release.

In an email to NPR, a State Department spokesperson confirmed the U.S. government “is in regular contact with the family” but gave no further details “due to privacy considerations.”

Basically, the best part of this story is the incredibly low bar that his family still thinks he might be alive.

And they are keeping hope alive.

The Czech ambassador in Damascus, Eva Filipi, confirmed that Kamalmaz was held in a Damascus prison soon after his arrest in 2017, according to the family. Filipi has represented U.S. interests in Syria since the U.S. withdrew its ambassador after the outbreak of the civil war.

Filipi named the particular jail where Kamalmaz was being held in Damascus and pledged to work for a speedy release, said Maryam Kamalmaz. But then, the trail went cold. “We did not hear from her again,” she said.

The family believes Kamalmaz is still alive and decided to make his case public now, she said, to make an appeal to President Trump as U.S. involvement in Syria winds down.

“I feel that President Trump has put a lot more effort than any other president in releasing detained citizens abroad,” said Maryam Kamalmaz. “Hopefully, he can bring our father home safely.”

So what’s the problem?

“The U.S. government has little credibility with the Syrian government and precious little leverage against it,” said Robert Ford, the last U.S. ambassador to serve in Syria.

So the US has no influence here. In a country at war. A war that our military is involved in.

Well, anyway, I dunno if he’s a Christian, but I do know that if Proverbs 25:21-22 and Romans 12:20 are at all accurate, then he must be driving the Syrians bug-fucking insane.

“He is a very special person,” she said. “If he’s in a prison, he is sending light to his captors, that’s how strong his energy is.”

This is not OK.

The most beautiful child of Syria—one of them anyway—is in prison.