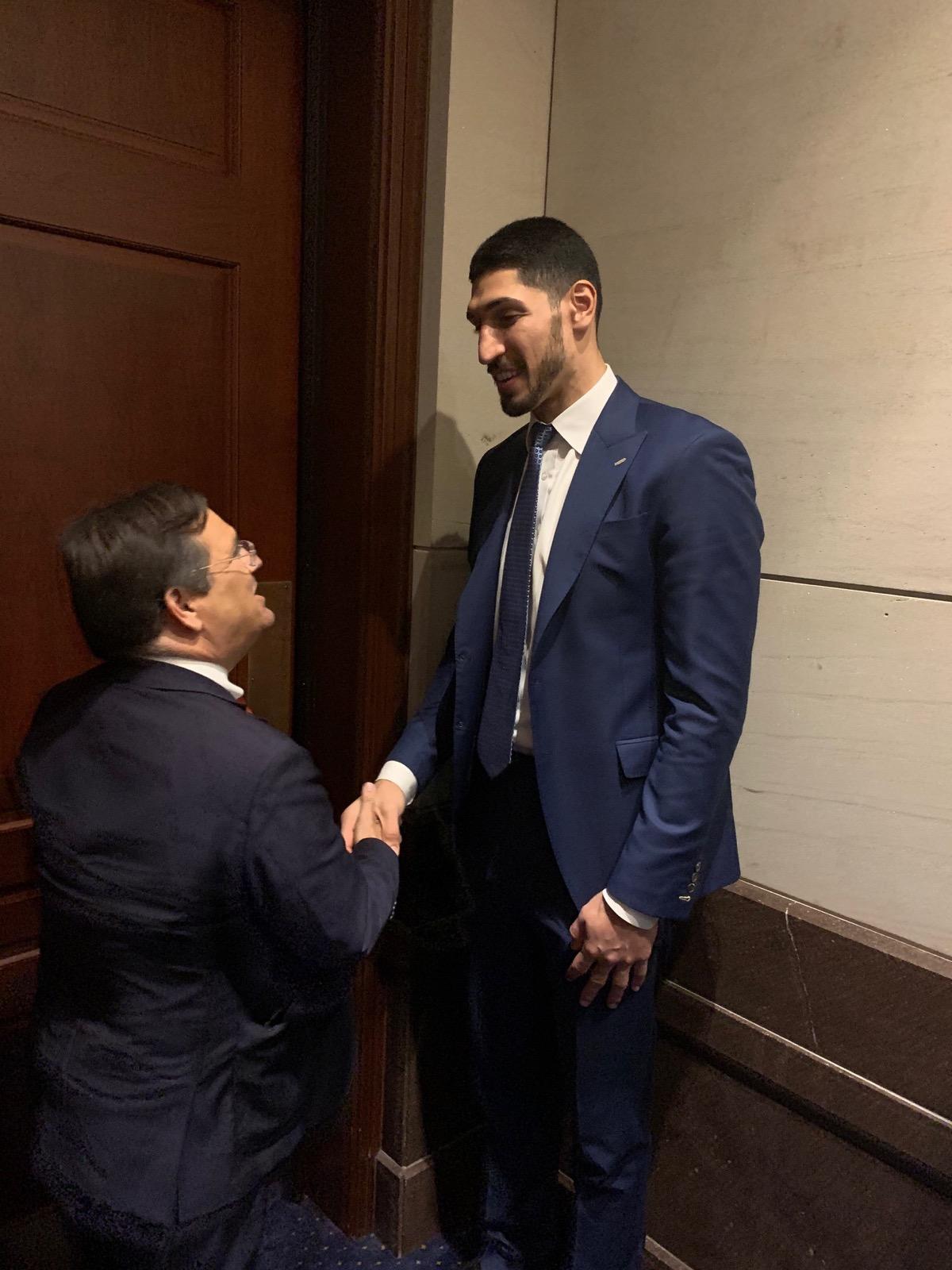 İTurkish NBA star #Enes Kanter to visit Capitol Hill ahead of #Erdogan visit.
Boston Celtics center has called the Turkish leader the 'Hitler of our century'”https://t.co/2fMElVLCQs

These last two gave him a nice platform for this short clip for why he doesn’t shut up despite great personal cost, financial and otherwise:

As Turkish President Erdogan arrived in the United States for a White House meeting on Wednesday with President Trump, Senators Edward Markey and Ron Wyden held up NBA player Enes Kanter as a victim of the Turkish government’s targeting of political rivals https://t.co/AFcoF44sEl pic.twitter.com/zI74MaX8In

He’s met with others in the past, such as MA Rep. Ayanna Pressley. Other political types have been Tweeting about him, and he generally tweets them back. Unless, of course, there’s people he ignores. I don’t actually google “Enes Kanter Super Star” every day.

Some people have wondered about dealing with the INTERPOL bullshit. (Note: This bullshit is a fucking problem; INTERPOL must hate this. Basically, Turkey fucking up he alliances again, such that one entity can make it unworkable.

New profile on Enes Kanter in the @WSJ. "If you have a platform, I feel like you need to use it. If you talk about the right things, kids will follow in your footsteps.” @EnesKanter is more than an athlete – he's leading the way for free speech in the NBA. https://t.co/aMle2X30cY pic.twitter.com/Hlj6zcZPHd

I love that his headshot photo looks like he’s doing “Magnum” from Zoolander.

As @Marciano490 noted up thread, how did France at least not see this impending problem when NATO was set up. France is worried now. Mr. Kanter has been trying to tell us about there is danger. There is harm. Look how he spent his off day!

I mean, this stuff has happened before; heck, the Weimar Republic was built to be a system founded on freedom that would never fail…

Enes Explains Why He Loves America

Great two minute clip that really gets at what he is all about. It’s enough to make even the most dyed in the wool liberal want to grab an American flag and ride around in dune buggies. Because we can.

In the Process, he explains why he’s such a great teammate.

Despite threats from the Turkish gov't, @EnesKanter continues to courageously speak out for human rights.

Thank you, Enes, for joining @RonWyden, @PressFreedom & I to introduce a bill to condemn President Erdogan’s authoritarianism. We will always defend your freedom of speech. pic.twitter.com/IQdbVflcgV

He’s basically the living embodiment of the immigrant American dream. If he could just get his family statesside… though I wouldn’t be surprised if they refused to leave. This is a family that makes statements, and they are brave.

This guy is so easy to root for on the court it’s scary.

Enes Elaborates on Why He’s a Great Teammate:

Father of the year 😂☘️ https://t.co/zMyEEsr7LG