The NYTimes running an Op-Ed written by a woman on the ground in northern Syria.

NYTimes: ‘The Bombs Are Drawing Close’

Our village was built to create a peaceful place for women in Syria who have fled war and other hardships. But now our futures are full of danger.

Ms. Neisan is a resident of the autonomous women’s village of Jinwar. 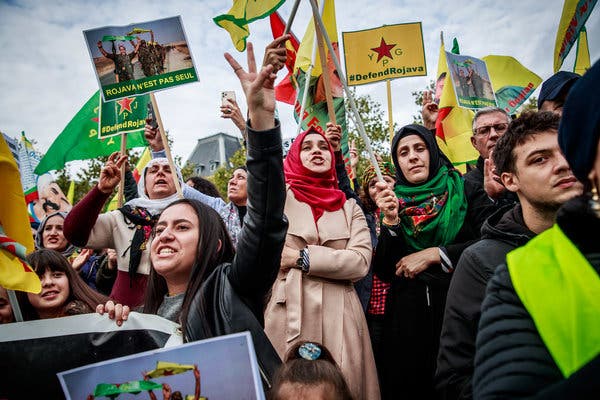 Members of the Kurdish community protested in Paris last month against the Turkish invasion of Rojava, where the Jinwar women’s village is located.Credit…Christophe Petit Tesson/EPA, via Shutterstock

Many guests once visited us at the autonomous women’s village called Jinwar in northern Syria: journalists, politicians, friends from all over the world. They got to know us, our village and our daily lives. They saw the houses of clay in which we lived together; the school where our children studied Kurdish; the center for natural medicine, which was supposed to open soon; our communal bakery; our chickens, peacocks and dogs; the trees we planted in our garden.

Now all of this is under direct threat from Turkey. Our village sits less than three miles from the border. The bombs are drawing close. Military planes and drones have been crisscrossing the region. Turkish-backed jihadist groups are reportedly being positioned just across the border, threatening to kill the “infidels” on the other side. These forces continue to advance toward Jinwar from the west, ignoring the cease-fire.

Our daily life together has been interrupted. Everything we have built up is in danger of being destroyed. We were forced to leave our homes, not knowing whether we would be back in a few days, or whether we would never return. We don’t know what will come next or when our life will be able to return to normal. But even though we have had to find another safe place because of the ongoing attacks, we will never give up on Jinwar.

Before the Turkish invasion, Jinwar offered a sanctuary to women from all over northeast Syria and beyond — Kurds, Arabs, Yezidis. Some of our husbands were killed by ISIS; others of us left abusive relationships to live in Jinwar. Here was a place where women were able to live communally and autonomously, to raise and educate our children free of male influence. Jinwar was just one small part of the societal revolution taking place across northeast Syria — known to us as Rojava — where women are organizing autonomously in every city, creating alternative ways of life based on the principles of communal living, ecological thinking and a cooperative economy.

Turkey and its proxies have targeted women. In Kurdish regions already under Turkish occupation, there are reports of forced prostitution and trafficking and kidnapping of women for forcible marriage. During this invasion, Turkey’s jihadist proxies have already beaten and executed a leading female politician, Hevrin Khalef, and abducted and abused female fighters. Turkey’s occupation of other regions of northern Syria will mean the same brutal exploitation for women here.

We have already known danger once; our village was built to create a peaceful place for women who have fled war and other hardships. But now our futures are full of danger as well.

In the weeks since the invasion, we have all scattered to different places, villages farther from the border. But now the shelling is drawing close to these villages too. Just last week, there were reports of three civilians killed in shelling close to Jinwar.

Back in Jinwar, when we woke up in the morning, we knew that we were safe and that the other women were close. Now I cannot sleep at night. My heart is always beating fast these days; I am afraid of the noise of the shelling. Everyone helps one another, but we also suffer one another’s pain. I don’t want to hear of any more friends who have died.

Our village came alive from dry, empty earth. Now it has fallen quiet once again.

We have had to leave behind our peacocks, our dogs, the garden where we worked together, the songs we shared together in front of the kitchen. We have left behind our dreams. I only hope that one day we can come back for them.

Fatima Sebah Neisan is a resident of the autonomous women’s village of Jinwar whose husband was killed by the Islamic State.

The Times is committed to publishing a diversity of letters to the editor. We’d like to hear what you think about this or any of our articles. Here are some tips. And here’s our email: letters@nytimes.com.

The major media sources have been progressing very cautiously on this issue and been reporting conservatively, but major media are now reporting that there is evidence of use of chemical weapons (white phosphorous), but also explaining why this has not been confirmed yet.

Newsweek: WHITE PHOSPHORUS MELTS CHILDREN’S FLESH—BUT NO GOVERNMENT WANTS TO INVESTIGATE, AND THE U.S. KEEPS USING IT, TOO

The U.N.-backed Organization for the Prohibition of Chemical Weapons (OPCW) previously confirmed it was aware of the allegations against Turkey and said it was “collecting information with regard to possible use of chemical weapons.”

However, a spokesperson since told Newsweek it was not investigating, but merely “monitoring the situation.” And The Times of London reported on Sunday that investigators from the OPCW are not only not investigating, but are also refusing to take skin samples taken from civilian casualties suspected of being burned by white phosphorus, arguing the cases fall beyond their remit.

It means that the tissue samples taken by Kurdish medical teams and transferred to Ibril in northern Iraq for analysis will be left to denigrate in refrigerators.

“Nobody wants this to be investigated”

Specialists at the OPCW told the London newspaper, on condition of anonymity, that they were approached by a number of embassies from NATO countries to not get involved.

“Nobody wants this to be investigated because of the answers that might come out,” Bretton-Gordon told Newsweek. After 23 years in the British Army’s chemical warfare division, he has spent the last eight years working with groups such as the OPCW, the ICRC and HRW, among others in Syria, helping medics treat victims of chemical weapons attacks. He has also helped these agencies develop new mechanisms for collecting evidence.

“I think one of the things people are worried about is that Turkey is responsible for this and Turkey is a NATO ally,” he said.

I’m like 98% certain this is not what NATO is for.

Also, the Newsweek guys have been having like a week long high-five fest mocking everyone for thinking Newsweek was defunct. They’re really having a grand time of it since they broke the story of the Baghdadi operation… and now people are realizing they know way more about what’s going on on the ground there than anybody else.

I must confess, I am among those who are surprised. Newsweek?