There are a lot of subtleties to the messaging going on that I can tell are lost on me for anything from me not understanding the advanced theory intelligence operatives are employing, or simply. It understanding local vernacular.

So keeping that in mind, I don’t know what it means when the spokesperson for Operation Inherent Resolve—

—Tweets like a precocious over-caffeinated bilingual middle schooler from Illinois.

And I used to have the Tweet but they deleted it. I wish I had taken a screen shot.  “Fortunately,” as you’ll see below, Turkey did.

What it doesn’t say that the Tweet it was responding to was a clip of I the first all women’s class of SDF fighters from their new academy in NE Syria.

What it the OIR spokesperson’s Tweet especially doesn’t say is that it called them “lions” in Kurdish with lion and hearts and down pointy hand arrow emojis. 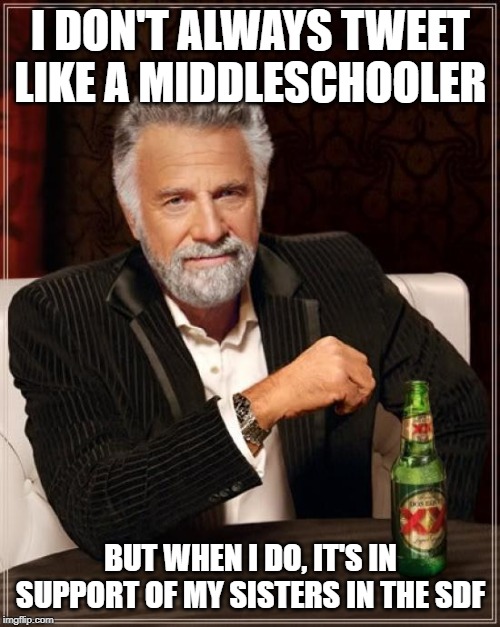 This war is so weird.

The spokesman for the U.S.-led anti-Daesh/ISIS coalition tweeted a PKK slogan. The post featured a retweeted video from the Voice of America in which an all-female class of SDF recruits was seen during the opening of a so-called academy in NE Syria. https://t.co/Azhc9cpQSc

What condescending patriarchal douchebag put that in an international media report?

For the curious, here’s an explanation of the reference:

This is ridiculous! He tweeted a Kurdish proverb meaning "brave lion may be a man or a woman" ("Şêr şêr e çi jin e çi mêr e!")

This sentence was also used in a poem by the Syrian Kurdish poet Cegerxwîn for Leyla Qasim (a KDP member!) executed by the Baath-regime in 1974 (1) https://t.co/n8c5BfRlE7 pic.twitter.com/oPlg3pW7q9

That said, it doesn’t really explain the emojis. This is either a really cool op or somebody is so fired, and I don’t think there’s really any good way to tell the difference.

Or, as a friend of mine mentioned, we can probably expect the OIR accounts to become much more boring for the foreseeable future.