So let’s take a brief look at what phase of Erdogan’s plan we’re in and how it’s going.

We can now see that Erdogan’s proposed safe zone and ethnic cleansing of the Kurds are of apiece.

And yet there always appears to be another thing with that guy. But here’s a brief reflection on the last couple of months.

ERBIL, Kurdistan Region – October 9 is an unforgettable day for the people of northern Syria who, after years of unrest, thought they could finally build a new life. The first whistle of a brand new war was blown by Turkish forces and their Syrian proxies against Kurdish forces in northern Syria, and the end is still far from sight.

Turkey was able to seize control of Sari Kani and Gire Spi, along with surrounding villages, from the Kurdish-led Syrian Democratic Forces (SDF). Some villages surrounding Ain Issa and Tel Tamr have also been taken from Kurdish control.

The operation was aimed at driving the Kurdish People’s Protection Units (YPG) – the backbone of the SDF – up to 32km out of the Turkey-Syria border region.

Turkey hopes to use the land to establish a “safe zone” in which to resettle mostly Arab Syrian refugees who have fled to Turkey since 2011.

So that brings us today and the “resettlement” of Syrian war refugees from Turkey to this part of northern Syria even though this isn’t where they are from and they don’t want to be there.

But the more I hear about the plan, the more it sounds like there’s something weird going on. And it’s bad.

I’ve started thinking about this more and more.

A million in this dark space to the right?

Will they all fit there?

Turkey has begun shuttling Syrian refugees across the border into northeastern Syria despite dangerous security conditions in the border towns—the first sign Turkish President Recep Tayyip Erdogan is moving forward with his plan to resettle some 3 million Syrians living in Turkey into 20 miles of formerly Kurdish-held territory.

Local media reports and information provided to Foreign Policy by the northeastern Syria-based Rojava Information Center show that small numbers of Syrian refugees are now trickling across the border into northeastern Syria just two months after Erdogan and his proxy forces invaded the region. The violent military operation has killed hundreds of Kurdish fighters and civilians and displaced 200,000 people.

Oh, I see. It’s actually three million refugees. This is just another bait and switch thing.

And it’s in a place that has been hemorrhaging hundreds of thousands of people because it’s been made basically uninhabitable by Erdogan’s war and ethnic cleansing campaign.

Plus, Turkey is opening up the wall there, i.e. the border crossing that ISIS had been using until the SDF closed it five years ago.

The Turkish occupation removes part of the border wall in the Derek area in the village of Ain Dewar. pic.twitter.com/7i2yp4rshN

So Erdogan is creating a high density population of what will become former refugees and now newly internally displaced people (IDP) who are widely believed to have become highly radicalized during their sojourn in the Turkish refugee camps.

And they get their own ISIS border crossing? It’s Christmas in Syria.

Is Erdogan trying to build a Terrorist Incubator? I can’t believe this guy. He still manages to surprise me.

Well, hopefully the world will respond.

But first, they’ll have to grapple with Erdogan’s cunning use of the Race Card to justify his… well, everything, really.

Turkish President #Erdogan says hostility against Islam and Muslims in the West are on the rise, claims Muslims are killed wherever they are, mosques were under attack, lives and wealth targeted in the West, and asks Islamic countries to intervene and speak up. pic.twitter.com/C0UzRW7Q6V

So Erdogan is really the only true defender of Islamic civilization—am I understanding this correctly?

He’s going to usher in the new golden age of Islam? He alone can save everyone?

In a speech posing Ankara as the sole voice standing up to Israel, he also found a way to bash both Israel, West "the better we protect children, women, elderly and disabled against western threats, the more we protect our family structure," he said.https://t.co/J57nF41RMM

Jerusalem Post: Erdogan bashes Israel, calls on Muslims to unite against the West

Ankara claimed it is the “lone voice” standing up for Palestinians today.

In a speech to the Organization of Islamic Cooperation, Turkey’s president Recep Tayyip Erdogan slammed Israel and called for Islamic unity among the “brothers and sisters” to confront the West and conspiracies against Islamic countries. Turkey’s ruler insinuated that Turkey was a victim of “terrorist attacks” because of its “principled stance” against “oppression in Jerusalem.”

I don’t know a lot about Palestinian or Israeli politics, but I’m pretty sure that somehow this can be seen as offensive to both Israel and Palestine (whom Erdogan could give a shit about), and also a whole lot of other countries and nations.

Hell, this is even a Fuck You to Iran.

Erdogan claimed that Israel was making the “situation in Jerusalem and Palestine” worse every day. He said that Israel doesn’t recognize justice, law, rights or humanity and that this “deepens the  crisis in the region against Muslims.” Turkey is seeking to champion Islamic countries aganst Israel, Ankara claimed. “We will never stop defending the rights of the Palestinians and standing in solidarity with all the oppressed.” Turkey is involved in an expanding military campaign and occupation of northern Syria that has caused more than 150,000 people to flee Afrin in 2018, and 200,000 to flee areas near Tel Abyad in recent months. Turkey doesn’t see those people as oppressed, according to the speech.

Turkey’s leader claimed that the country wants to “better protect children, women, elderly and disabled against western threats.” In this part of the speech he stressed conservative, far-right and family value themes, arguing that the West was attacking the concept of the family. “The more we protect our family structure,” Turkey’s leader said, indicating that

OK, you know what? This is an empirical statement at this point.

That means we can use data to assess his statements about being the champion of women and children, right?

So let’s check the data. 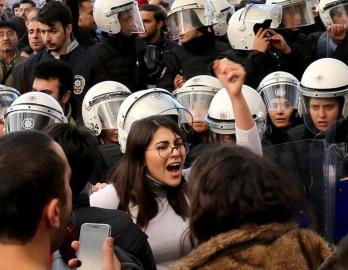 Police have dispersed a protest in Istanbul where women sang their rendition of the feminist protest song “A rapist in your path,” which has gained popularity around the world after it was first performed in Chile.

About 300 women gathered on Dec. 8 in the Kadiköy district of Istanbul province for their version of the protest song first performed by the Chilean feminist group “Las Tesis.”

Seven demonstrators were detained after a brawl between protesters and police.

The slogans shouted by the demonstrators included “elements of crime,” according to an Istanbul Governor’s Office statement.

I mean, look at them come out in force. She must be very dangerous. Like, some kind of super Fem-Criminal.

That’s the only reasonable expectation, right?

This woman is Hatice Tas: the elected mayor of Ikikopru District in the Kurdish province of Batman in SE Turkey. She is not allowed to enter the municipality building after police surrounded it @metinyoksu pic.twitter.com/60GqfpCL5V

And this is the kind of shit Erdogan wants to export to the region and to the world?