This is an Old Thing, Even for US

Old guard foreign policy esyablishment: Ack-shu-ah-lee… this is our war.

The National Interest: Made In America: How the U.S. Government Paid For Turkey’s War in Syria

Foreign Policy:  I Saw the Birth, and Bloody Death, of the Dream of Syrian Democracy

The Syrian revolution was started by patriots—and ended by international jihadis supported by the United States.

Great history of our involvement in the Syrian Civil War and how the US was a big part of the problem before it became part of solution.

The US started arming Syrian rebels against Assad before figuring out who were good guys and who were bad guys. Mistakes were made.*

*Are there any Tulsi Gabbard fans in the house?

Turkey bought the tanks back in 2005. Fwiw they were used tanks, with low miles, driven by little old ladies who only went on maneuvers on Saturdays.

That’s funny. I’ve seen it argued that if you think about the military industrial complex from a supply and demand POV, you start spotting troubling issues that have unintended outcomes—as with surplus inventory.

CNN: US is looking in to miss appropriation of weapons by Turkey. I’m sure Germany is too. What I’m not sure is what they do about it if they find out it’s true.

Israel and Turkey have a complex relationship.  Initially it was fairly warm but ever since Erdogan came to power, it’s been getting  frosty. Still, geopolitics basically forces the two together.

Stratfor:  Geopolitics Keeps Pushing Turkey and Israel Back Together

Thanks for the link. That makes a lot of sense.

It also explains in greater detail why now might be a time for Israel to flip, what with the US apparently dedicated to blocking Iran in Syria, which means they don’t need Turkey to mess with Assad anymore.

And yeah. I said weeks ago all his meant the Rojava project was over. But they just won’t die. And it’s not hard to see why, if they stick around, they’re a better ally than Turkey.

Does heavy mean a lot of or armored?

Also, when Israel wants a result in the region, does it have to use reverse psychology  because its stated preferences will usually provoke antagonistic responses from neighbors?

The latter. No main battle tanks or anything, but light armor / mechanized infantry stuff. And artillery.

Good question. And I shudder to think what kind of black flag conspiracy theories would emerge because anything hey do would be seen as three levels of statement to different people.

In other news, it is still very, very important to Daesh that you know that they are still assholes.

#SOHR The pro-#Turkey factions steal agricultural equipment and the seeds of wheat and barley in #Ras_Al_Aynhttps://t.co/DNz7wxzLHw

SOHR: Jaysh al-Sharqiyyah which is loyal to Turkey cuts off the citizens’ trees in Jendires in Afrin countryside and sell them as firewood for heating

The punishment of members for posting their crimes on social media has to be seen in juxtaposition to what appears to be the Kurds & Friends’ increasingly effective multi-front PR campaign.

I mean, they’re just better at this: 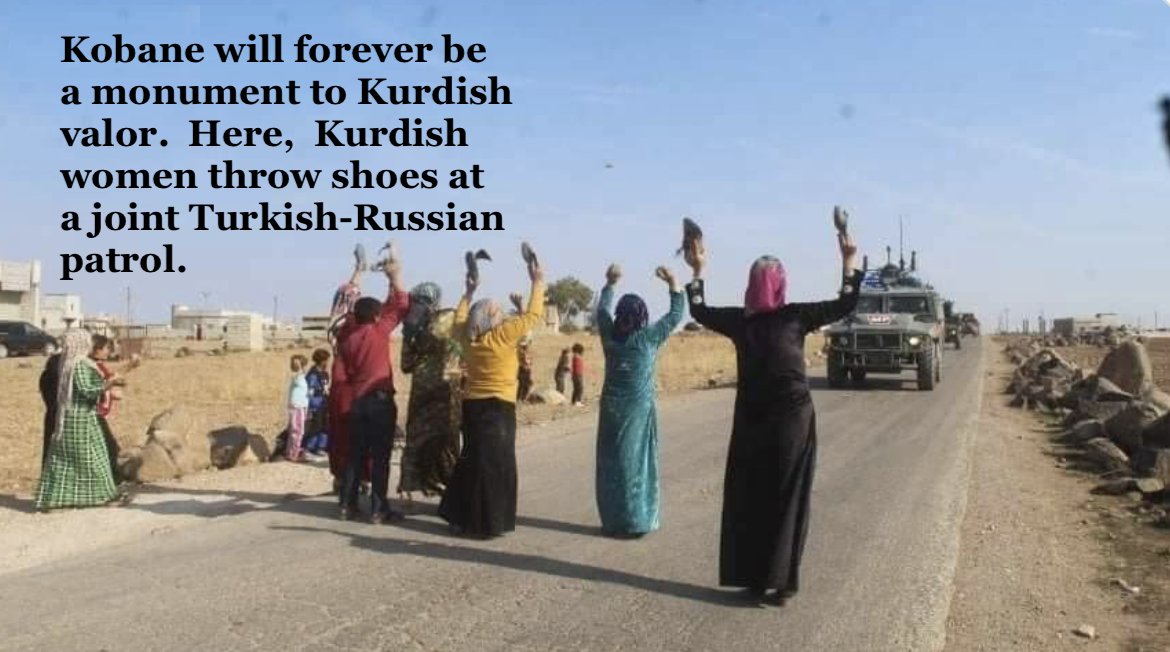 COMMENTS ABOUT THE BIG PICTURE

And while I’m at it, @CousinTonyFromPadua found the political cartoon I had been looking for: