Rev – is the feeling in your monitoring of local media that this is something that couple spiral (even more) out of control and turn into a real state v state war (or a regional war) or is this all just power positioning now that there is a vacuum?

Damn good question. A week or two ago, I would have said there was a good chance what with the proximity of so many states. (The people who put together the decollision plans should all get medals from their respective commands.)

But now, I think probably not. Like, it’s a shit storm, but there are a couple paths to an “orderly” equilibrium that doesn’t involve states going to war. But it’s a matter of how ugly things are on the ground.

It make sure sense to explain the second first, which has not recently come into focus, as that finishes laying the terrain for how Turkey and Syria will approach the other issues.

Stating the strategy is easy:

We’re deploying forces to control eastern Syria and, specifically, the border with Iraq, in order to stem Iranian and to a lesser extent, Russian influence in the region.

As posted about in the ISIS thread, the oil is pretextual bullshit that the Iran hawks came up with to get Trump to redeploy instead of pulling out.

The National Interest: Inside the Iran Hawks’ Hijacking of Trump’s Syria Withdrawal Plan

ForeignPolicy: Inside the Iran Hawks’ Doomed Campaign to Stay in Syria

Remember in Star Wars where Han just wants to get the fuck off the Death Star and Luke convinces him to help with his mission by leaning in and saying, “She’s got oil,”? Basically, that’s how our policy was made.

The tactical situation this creates on the ground is big fucking insane.

So, there are three ways to get out of eastern Syria to Iraq.

So 3 is a for the time being a non-starter. It literally only reopened about a month ago after being closed for five years because of the war with ISIS. It’s in rough land in the middle of nowhere with nowhere to go. Also, destabilization in Iraq could empower western Iraqi militias whom we haven’t always gotten along with. It’s possible the crossing is reliable but who knows? And anyway, the key American military bases are in northern Iraq anyway.

So the crossing closest to Deir ez-Zur, where our oil is stored in the ground, is off the table. The only reason I even know anything about it is because I was curious why the major sources weren’t even mentioning it, and I wanted to know why there was a road there.

This is significant because Deir ez-Zeir only has two major highways, so only two eastern routes to Iraq.

So that leaves 1) and 2), which are conveniently right next to each other in northeastern Iraq. (The airport is a bit to the east of the X because I missed. Sue me.)

And lo and behold, there turns out to be another oil field up by Rmelan that we need to defend. A cursory internet search suggests that… basically, it exists. But barely.

If you’ve watched be video of the American soldier being interviewed who is clearly irritated that he has no coherent mission, that’s where he was.

I spent a lot of time with US Special Forces on the ground in Syria where they had a clear mission over two administrations to defeat ISIS. These images of US forces now in Syria with an ill-defined mission to guard small oil fields make me cringe. pic.twitter.com/gt0uXBtZd9

So reading the tea leaves, the US’s military mission here is to secure northeastern Syria.

Now look at that border crossing.

It’s literally 1km south of the tripoint border of Turkey-Syria-Iraq (probably why boundaries were drawn that way). There are difficult to police mountains for smuggling. There are persecuted ethnic groups whose populations span the border.

It’s a security nightmare for Turkey, even if Assad decided not to press it.

So that’s the US situation: We’re parking ourselves right in the middle of Iran’s intended northern corridor of influence. And somehow, given all of the above, we’re going to try to find some way to supply them. Again, just one civilian’s opinion, but medals for all the logistics officers who manage to pull his off.

So the situation is currently fluid (Clearly. I mean, we are currently acting completely counter to the Trump administration’s stated policy.), and completely unpredictable to the other players. But kinda stable in a weird way in the short term, as long as everyone is afraid to take a shot at us—as Michael Weiss points out, there is a lot of posturing but at the end of the day, when the US deploys, everyone stands down, even Russia.

Basically, imagine if you couldn’t get your car out of your driveway because there was a bear rooting around in your garbage. You’ll need a plan for dealing with it, but in the more immediate sense, you’re going to try not to bother it.

If you think about it, that “terrain” starts to bring in to focus the Syria-Turkey-SDF-SNA situation on the ground. It’s notable that Rojava and the SNA are both small, officially unrecognized “groups” edged into the middle of three states, two of them with very powerful militaries, and Russia lurking around. And Iranians doing Iran things; they have people in the ground with Assad’s forces doing Lord knows what.

There was a great political cartoon circulating awhile back of a soldier representing the Kurds holding off Assad on one hand, Turkey with the other, stepping on ISIS’s head coming out of a hole, ducking under Russia, with a US knife in its back. But I can’t find t, even though it was all over pro-SDF Twitter. Maybe @CousinTonyFromPadua can find it?

This one is pretty good, though. It’s from Oct 13 for some perspective on how clearly this was unfolding in people’s eyes after Trump pulled us out. 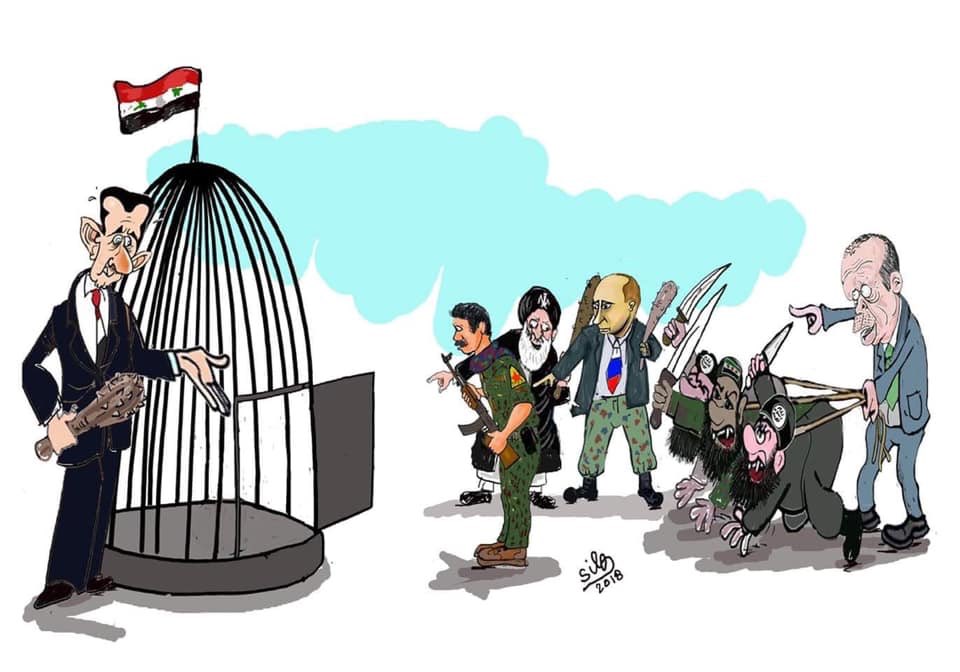 So the question is, how will Syria and Turkey resolve the SNA which Turkey has been backing (they’re gonna get fucked), SDF/Rojava/“the Kurds” (they’ll probably get fucked, but the question is precisely how—and that matters a great deal geopolitically now), and the border/occupied territories.

So, tl;dr, these can be resolved without large scale inter-state conflict.

But a lot of this will depend on what Assad manages to get (which is complicated) and what Turkey tries to do about northeast Syria which now has both SAA and SDF working together (for now) and a new deployment by the US which has been reported to be scouting sites for three new bases.

I can flesh out the mechanics of the Syria-Turkey-SDF-ISIS situation probably after the watching the Enes Kanter All-Stars Celtics.